A territory of natural treasures, cultural heritages and traditions that will surely seduce you.

Castiglion Fiorentino and Cortona are located in an extremely favourable position to visit the main and most interesting art sites, both of Tuscany and Umbria. You can visit different ancient and picturesque villages every day and make them fascinate you thanks to their histories and traditions that still live in the passion for tradition of the inhabitants.

We have selected the best places to see based on beauty and popularity. 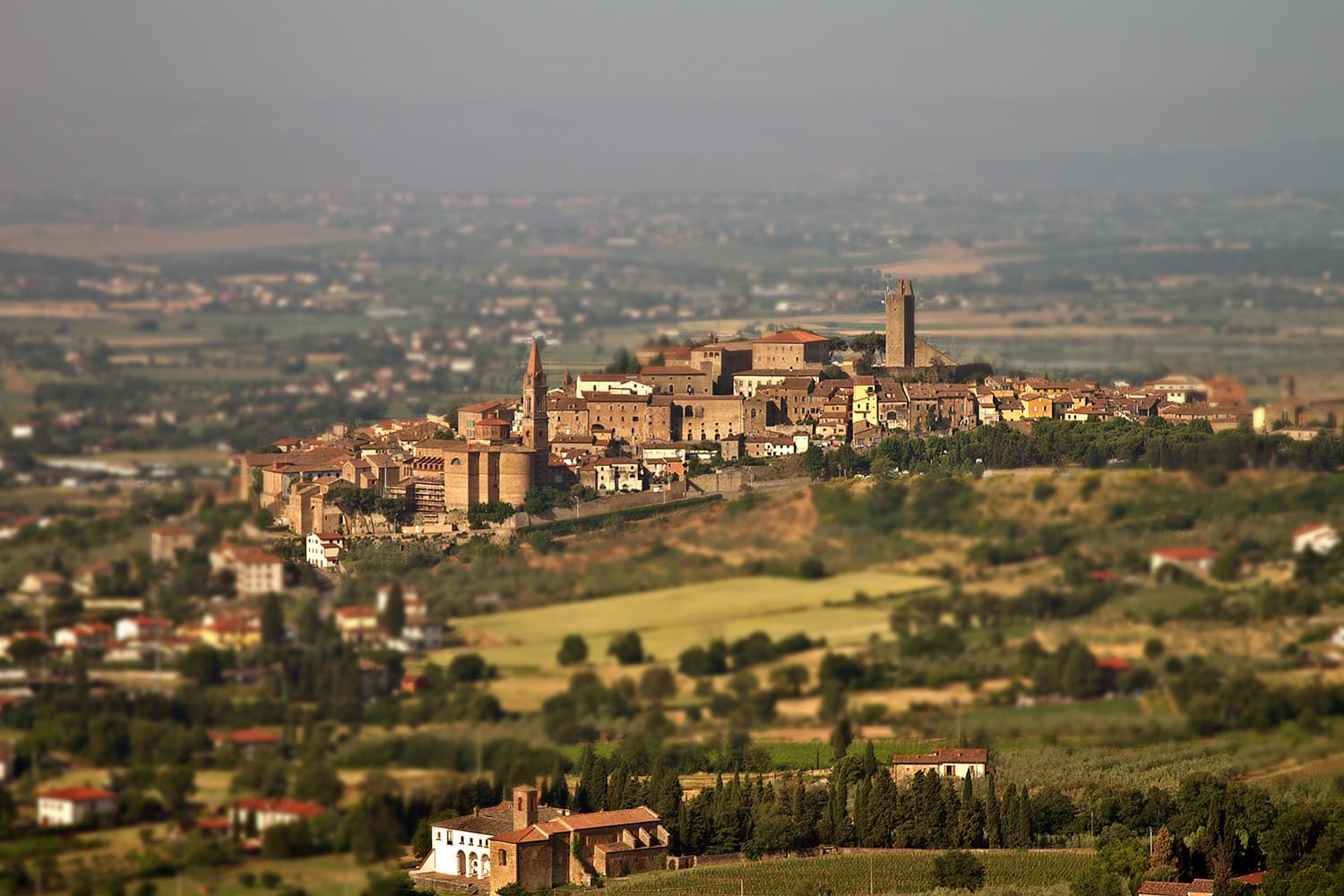 Situated at the summit of a hill (m. 345 u.s.l.) Castiglion Fiorentino shows wonderful landscapes both towards Val di Chio and the Pre-Appennines, which appears almost silver thanks to the olive groves. The panorama is dominated by the Castle of Montecchio (X century), once the dwelling of the well-known captain John Hawkwood. The historic centre gives an evocative glimpse of the medieval period. Indeed, there are many elements from that time: walls, doors, tower of Cassero (XIVcentury), Church of S. Angelo (XII century), Church of S. Francesco, Church of S. Agostino and the Palace of the Praetorian.

Instead, are from the Renaissance: the Vasari Gallery (1513), the Square of Municipality, Church of Jesus (1545) and Church of Consolation (1607). Who decides to visit the area in the third week of June will have the chance to see the famous “Palio dei Rioni”, an equestrian contest between rioni inhabitants with medieval roots. 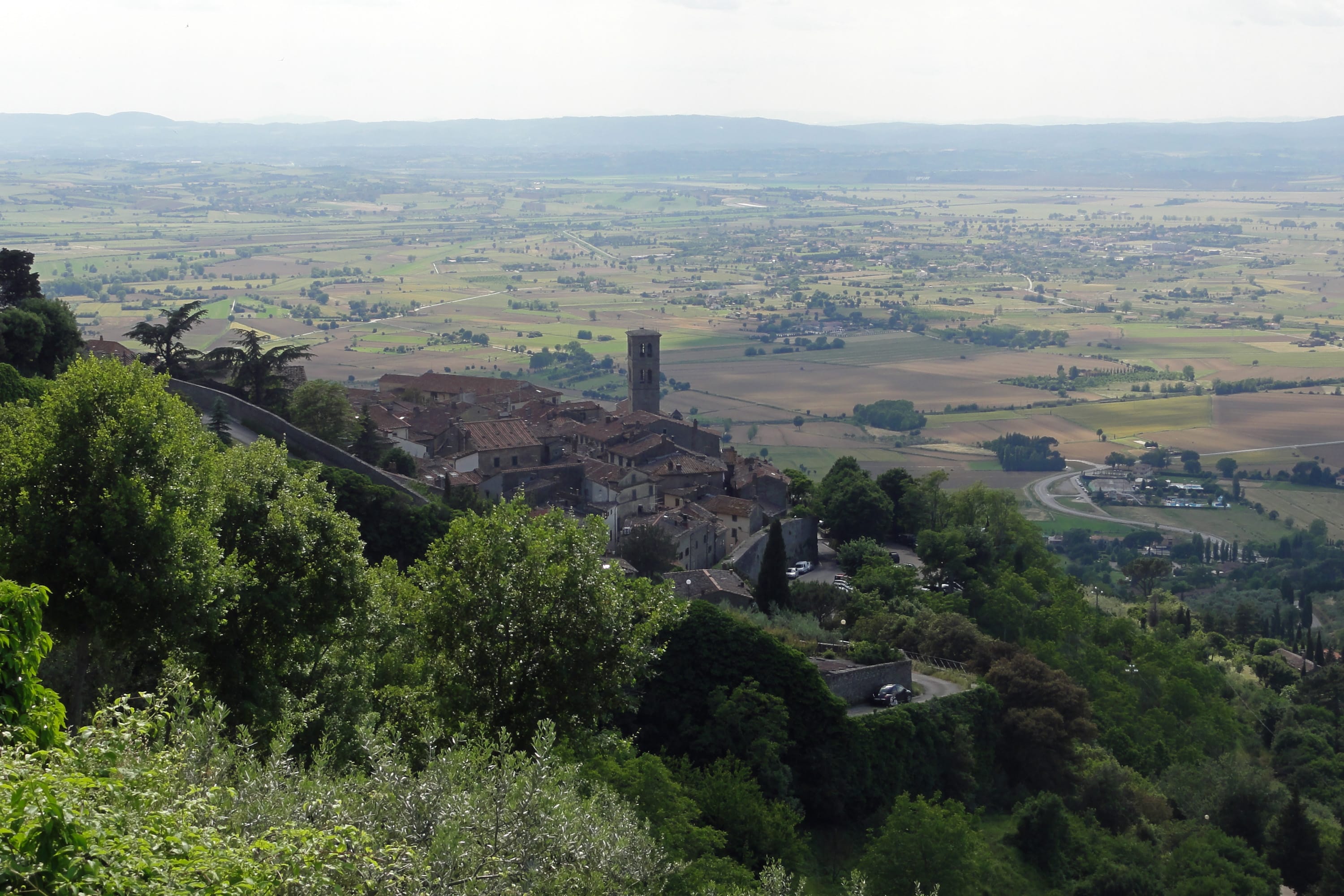 It’s one of the most beloved villages all over the world. It is the place to be if you are looking for signs of the Etruscan past of Tuscany.

The town is on a hill and shows a spectacular view on Valdichiana and Amiata Mountain. Born with Etruscans, it was then conquered by Romans and Goths before becoming free again in the XII century. Once free, Cortona reached its maximum glory. The centre is represented by Piazza della Repubblica (square) and by Palace of the Praetorian, currently hosting the Etruscan Museum. In the Museum, you can find the most important finding: the Chandelier from the V century B.C.

The Diocesan Museum is in front of the Cathedral and hosts Annunciazione by Beato Angelico and other masterpieces from renowned Tuscan artists, among which Luca Signorelli, born in Cortona.

Other churches that are worth a visit are “Saint Francesco” in gothic style and Sanctuary of Saint Margherita with her remains, since 1362. From Medici’s Fortress, you can contemplate the landscapes and right outside Cortona, North-East, the hermitage founded by Saint Francis back in 1211 can be visited. It was an important town at the time of Etruscans. In the Medieval part of the town, there are the Cathedral, the Medici’s Fortress, ancient palaces once owned by aristocrats and old towers. The modern part of the town is constantly in expansion. Among the places you can not miss, there is the Church of Saint Francis in the same-name square with the frescos by Piero della Francesca. Lovely medieval village near-by Siena, located in the highest summitt of the Tuscan hills. It is a wonderful example of architecture from the Renaissance. Montepulciano is known as the gem of the XV century as it can be guessed by the beautiful Cathedral, Loggia del Mercato and Palaces of Avignonese and Tarugi. Palazzo Bucelli currently hosts findings from Etruscan and Latin times. Other interesting places to explore are the Church of Saint Agnes, patron saint of the town, and the Civic Museum. Montepulciano is the land of origin of the excellent Nobile wine. 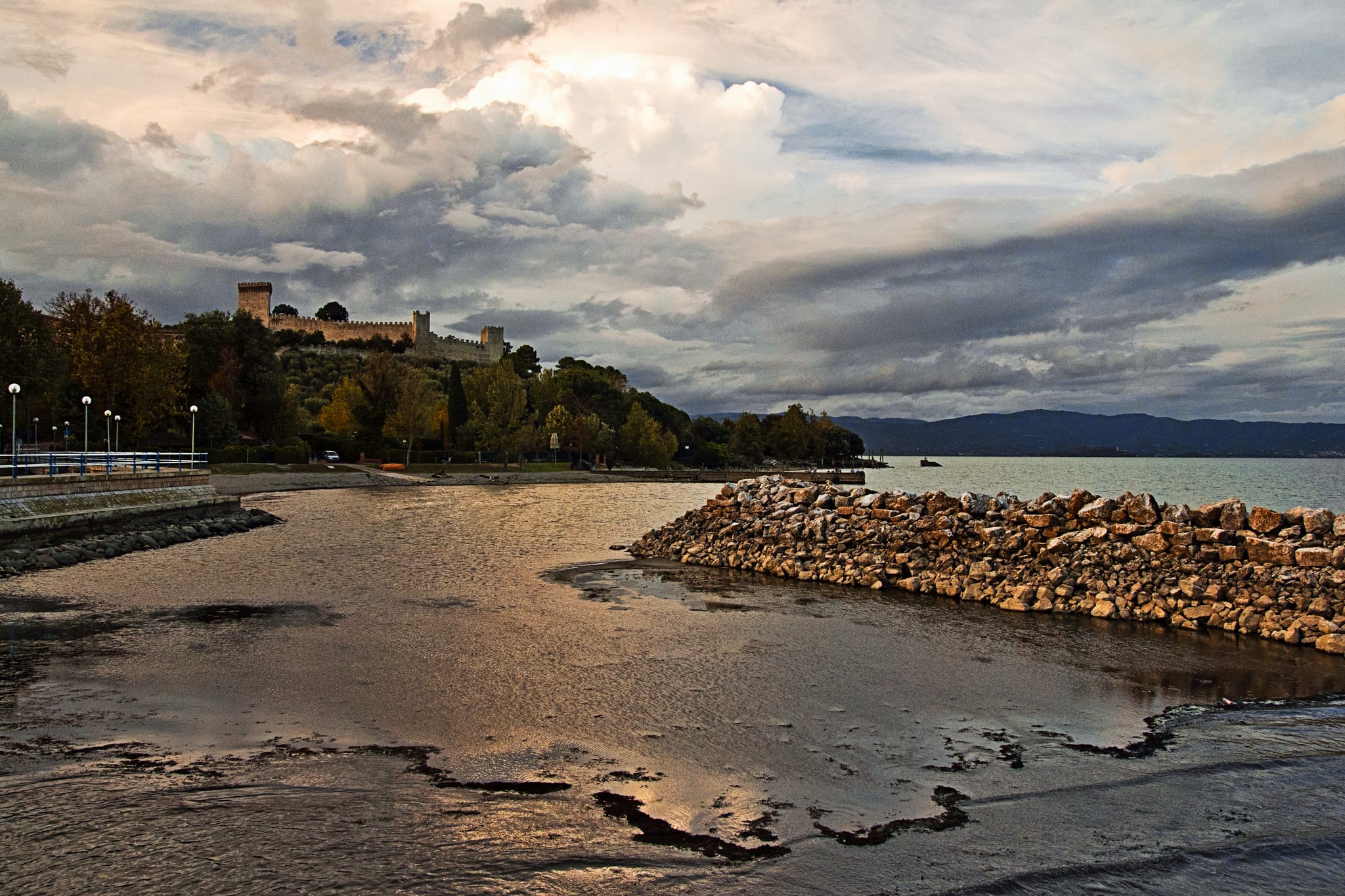 The village is situated in a promontory that used to be the fourth island of Trasimeno Lake, which is the fourth in Italy for size. The surroundings of Lake Trasimeno are also reach of places to visit. Moreover, in summer, it is possible to explore the islands of the Lake and the nearby villages.

The best beaches are close to Castiglione del Lago, founded by the Etruscans in the old days, but still preserving the castle and its walls. 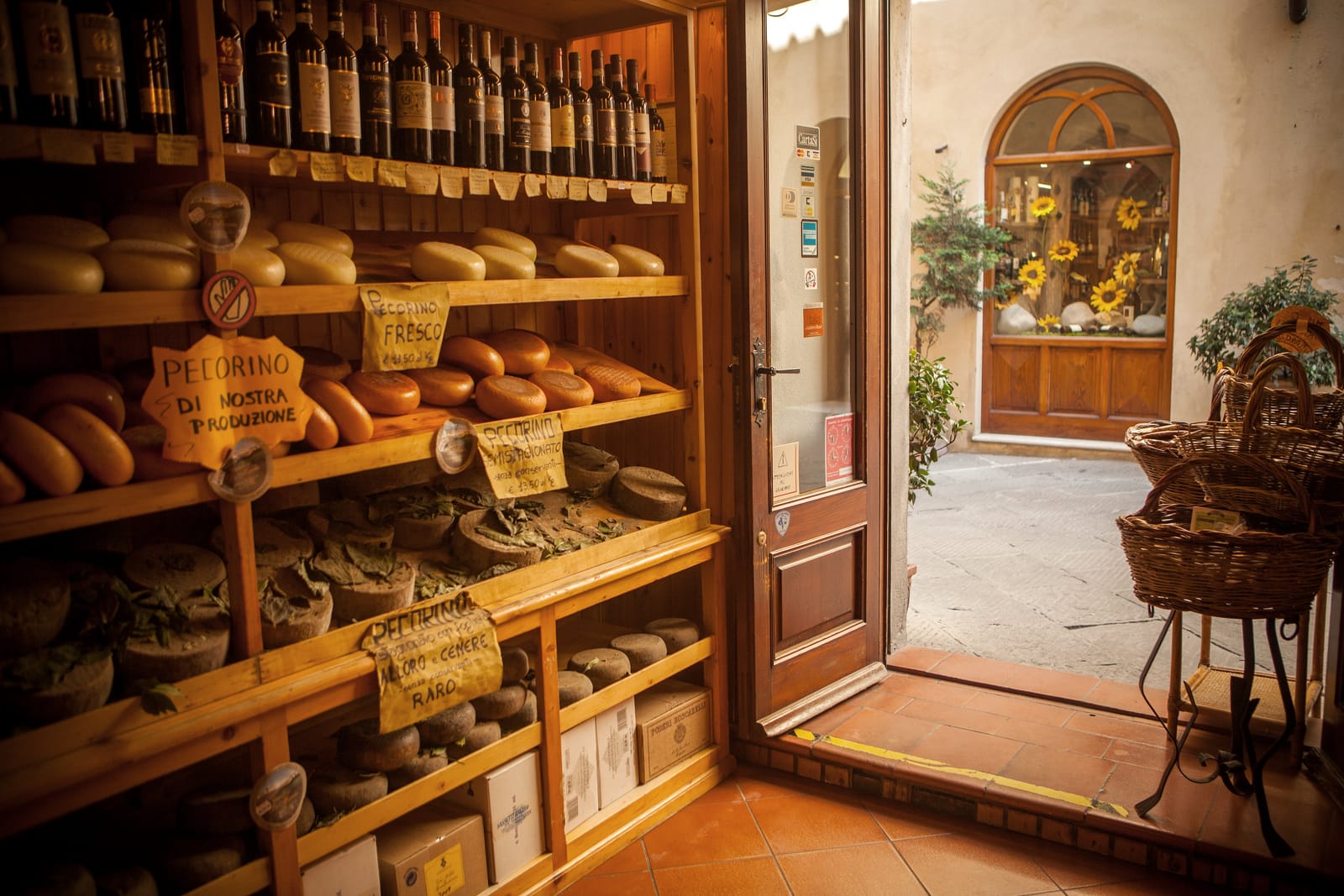 The medieval village is an unmissable gem, offering rarely beautiful landscapes, with gentle hills scattered with lines of cypresses as in the most typical postcard from Tuscany. In the city centre, you can admire the Dome, Palazzo Piccolomini and the Diocesan museum, hosting the works by Sodomia and gorgeous Flemish tapestries from the XV and XVI centuries. Pienza is well-known for the production of cheese, typically made from goat’s milk in the countryside of Val d’Orcia. Cheeses are aged there, on the wavy hills and flavoured with countless tastes, from nuts to wine, to fossa cheese. 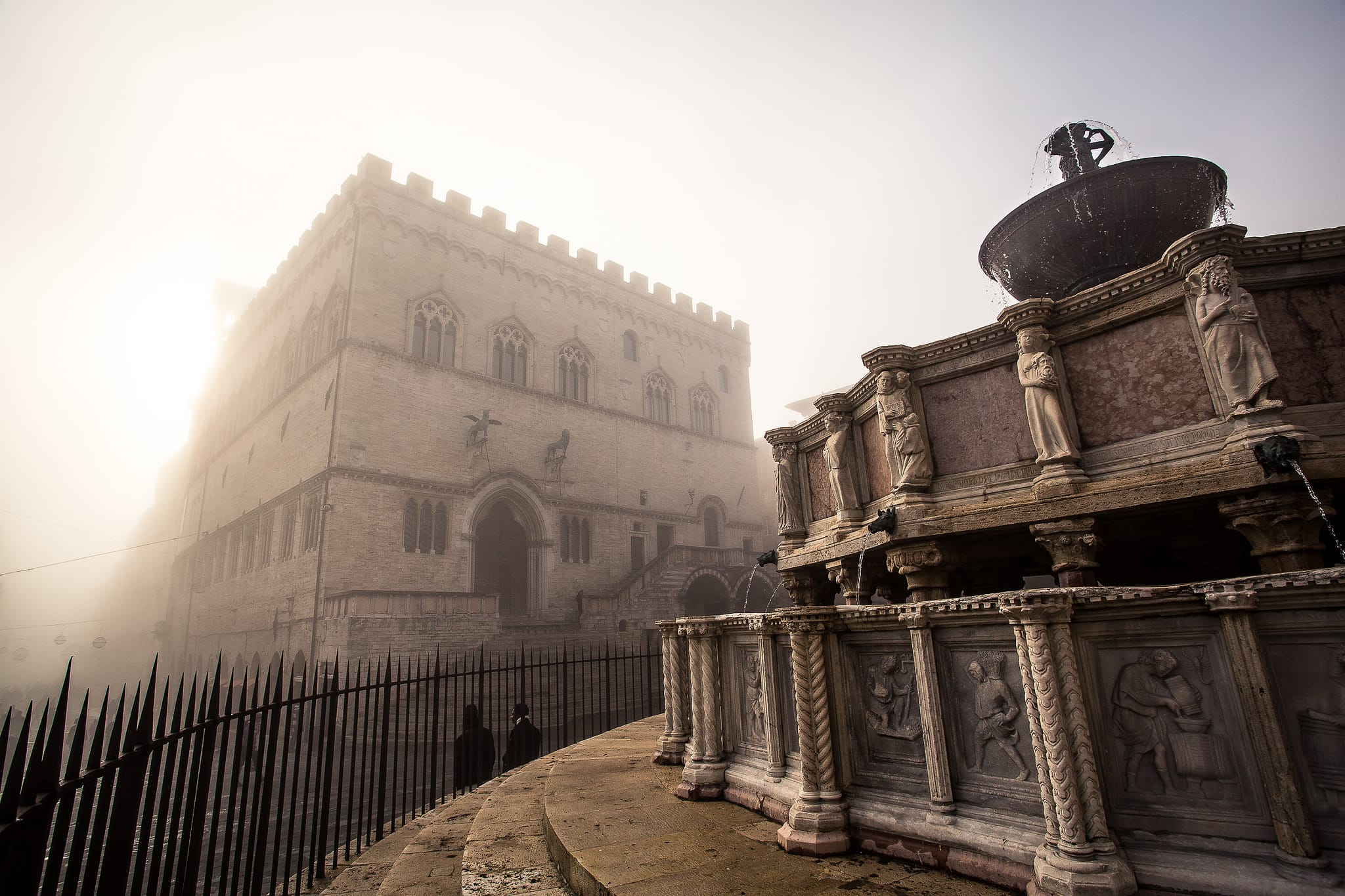 Born as an important junction for Etruscans, it was very important also during the Middle Ages. As such, the town has many traces of its magnificent past. County seat of the Region of Umbria, Perugia is a cultural and touristic destination, hosting more than 700 international students thanks to the eminent University. Among the places you can not miss, there are Fontana Maggiore of the thirteenth-century, a walk through the city centre, Palazzo dei Priori, Rocca Paolina and the National Gallery of Umbria that is one of the major art galleries of the middle-Italy. 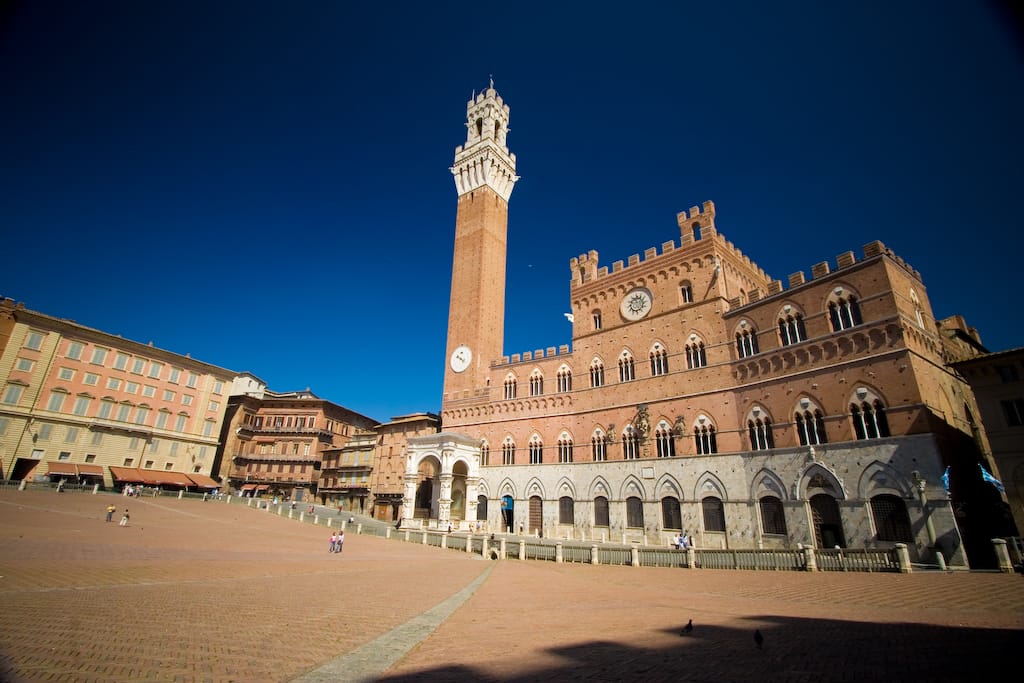 It can be referred as the capital of gothic style. Since 1995, Siena is part of UNESCO. At the heart of the city, Piazza del Campo is a must, as it’s a symbol of Siena. We recommend you to visit Palazzo Pubblico, the Museum and the Cathedral that had been built at the end of the twelfth century. Twice a year during July and August, inhabitants recreate the medieval atmosphere by organizing the world famous “Palio”. Besides this one, there are other 600 high quality events every year, such as music festival and exhibitions. Even handcraftsmanship, food and wines are excellent and convey our culture and tradition.

The sanctuary of Verna is situated on the Tuscan Appenines, on a mount covered with beech and fir trees. It is visible from the whole Casentino and from high Val Tiberina, also due to its unmistakable shape and its peak divided in three parts (m 1,283). On the rocks and immersed in the forests, there is the Sanctuary currently hosting copious treasures of arts, culture, history and religion. Another important religious site nearby is the Monastery of Camaldoli, where Saint Romualdo founded the Camaldolese Order around 1000 A.D. Montalcino is famous for the production of the well-known wine “Brunello di Montalcino”, beloved and appreciated even abroad. Montalcino is located on the summit of a hill that dominates the entire Val d’Orcia, Val d’Arbia and Valle dell’Ombrone, all at ance.

Typically in the style of the Middle Ages you will find the Palace of Municipality, the Cathedral and a few Churches (Saint Augustine, Saint Egidio and Saint Francis. In the Archeological Museum are hosted several interesting findings from the area, from the prehistoric and Etruscan times, while in the Civic Museum there are two artworks by Andrea Della Robbia. 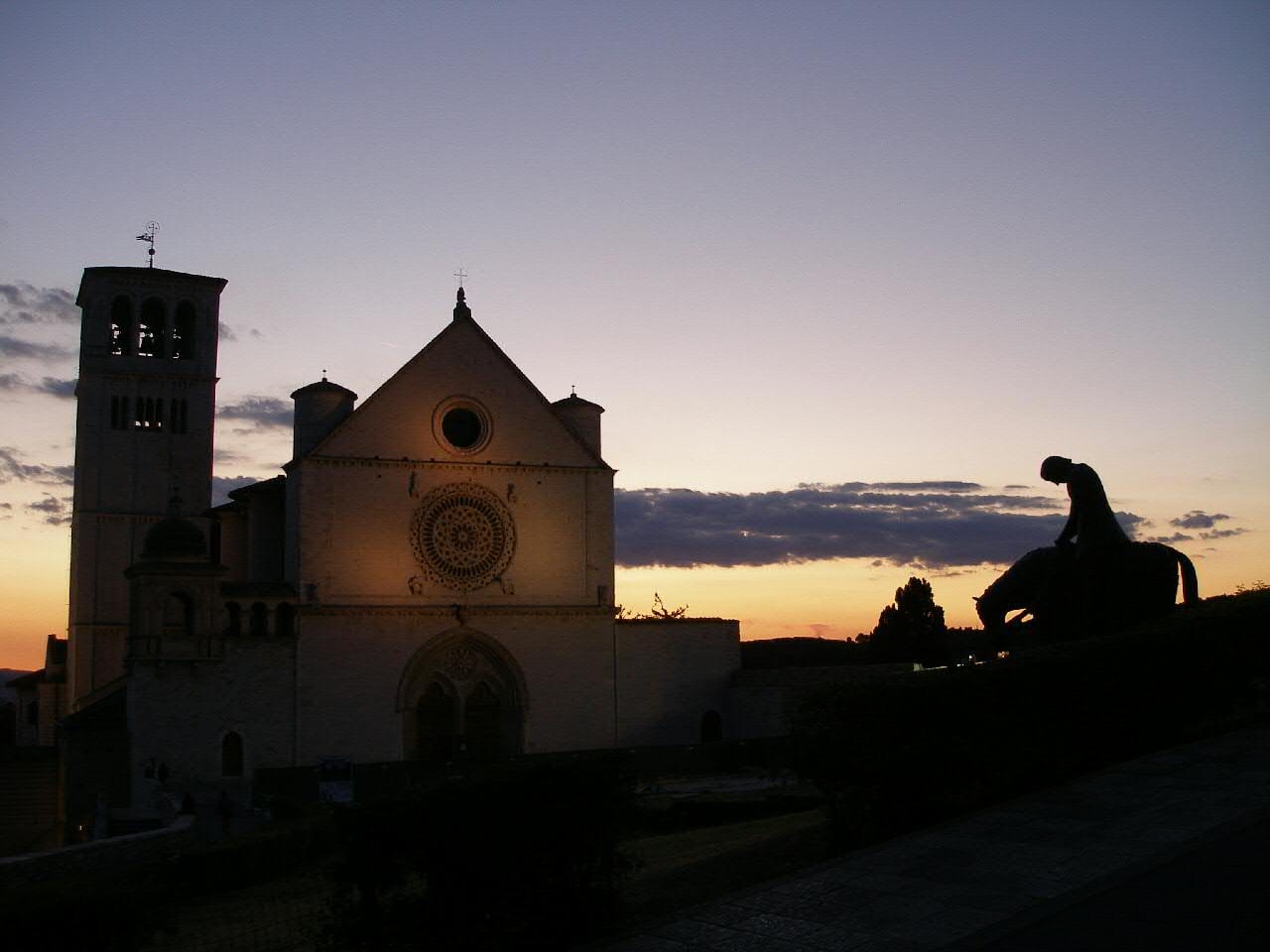 Enchanting and spiritual town, Assisi is located at the foot of the mountain Subasio. Founded by the Etruscans and dominated by the Romans, it was then the birthplace of Saint Francis, patron of Italy.

The main attraction of Assisi is the Church from 1300, a relevant pilgrimage landmark. Made of two churches, the top one was built between 1228 and 1230 and contains frescos by Giotto and Cimabue about Saint Francis’ life. The other part of the church had been built between 1230 and 1253. Besides it, there is the Franciscan monastery, founded by Saint Francis in 1206. Another spectacular example of gothic architecture is the Church of Saint Chiara, where you can see the crucifix that talked to Saint Francis, according to the legend. 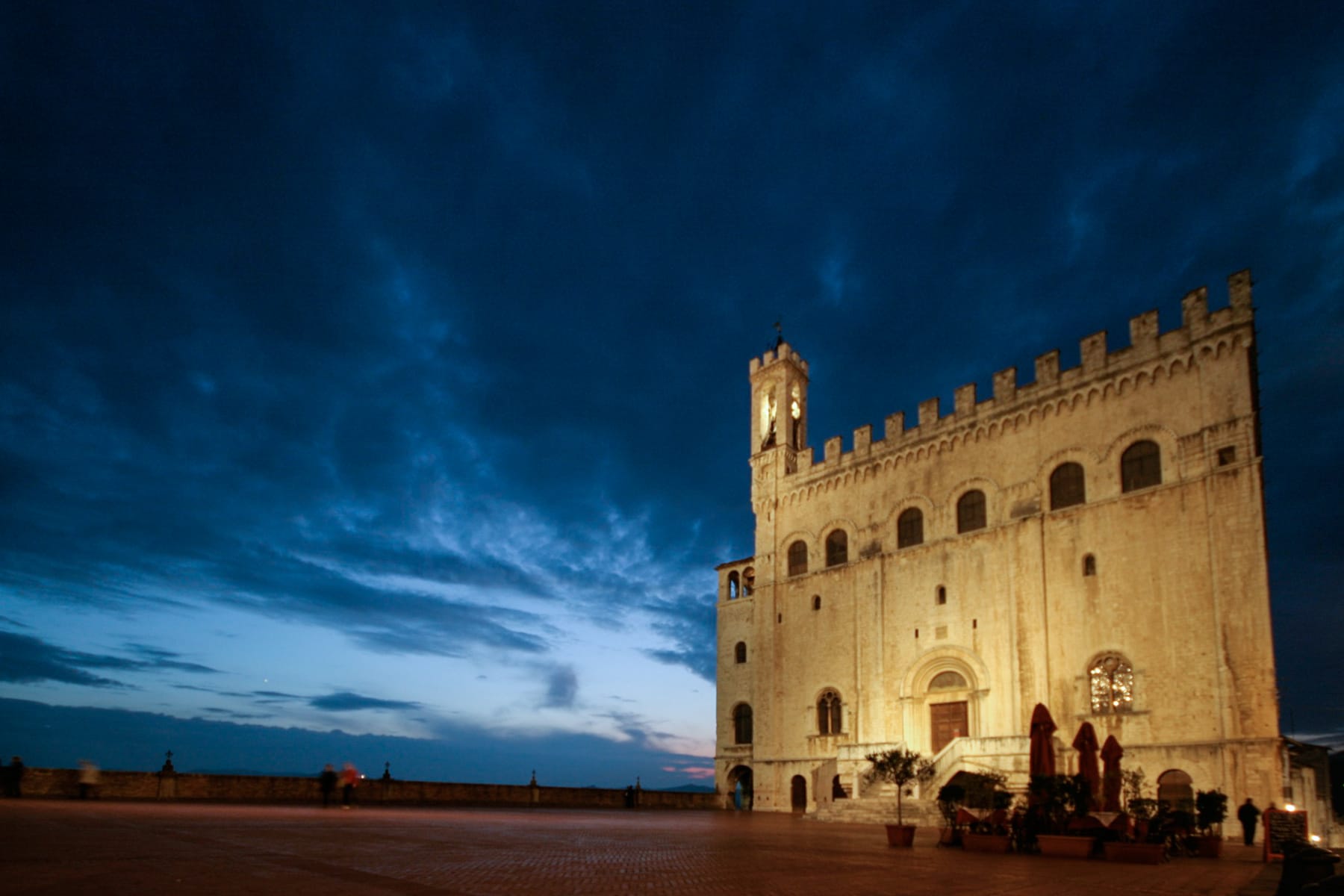 Despite Gubbio has a Roman origin, it seems like a medieval village as those from the north of Umbria.

It is famous for local craftsmanship, in particular potteries. Moreover, it is well known for its traditions, like the church candles parade in May. Start walking from Piazza Quaranta Martiri, which takes its name from the Nazi’s slaughter, you can reach the Dome (from the thirteenth century), brilliant example of gothic architecture. Other relevant monuments are Palazzo Ducale, Palazzo dei Consoli and the Roman Theatre, the amphitheatre that is perfectly preserved. 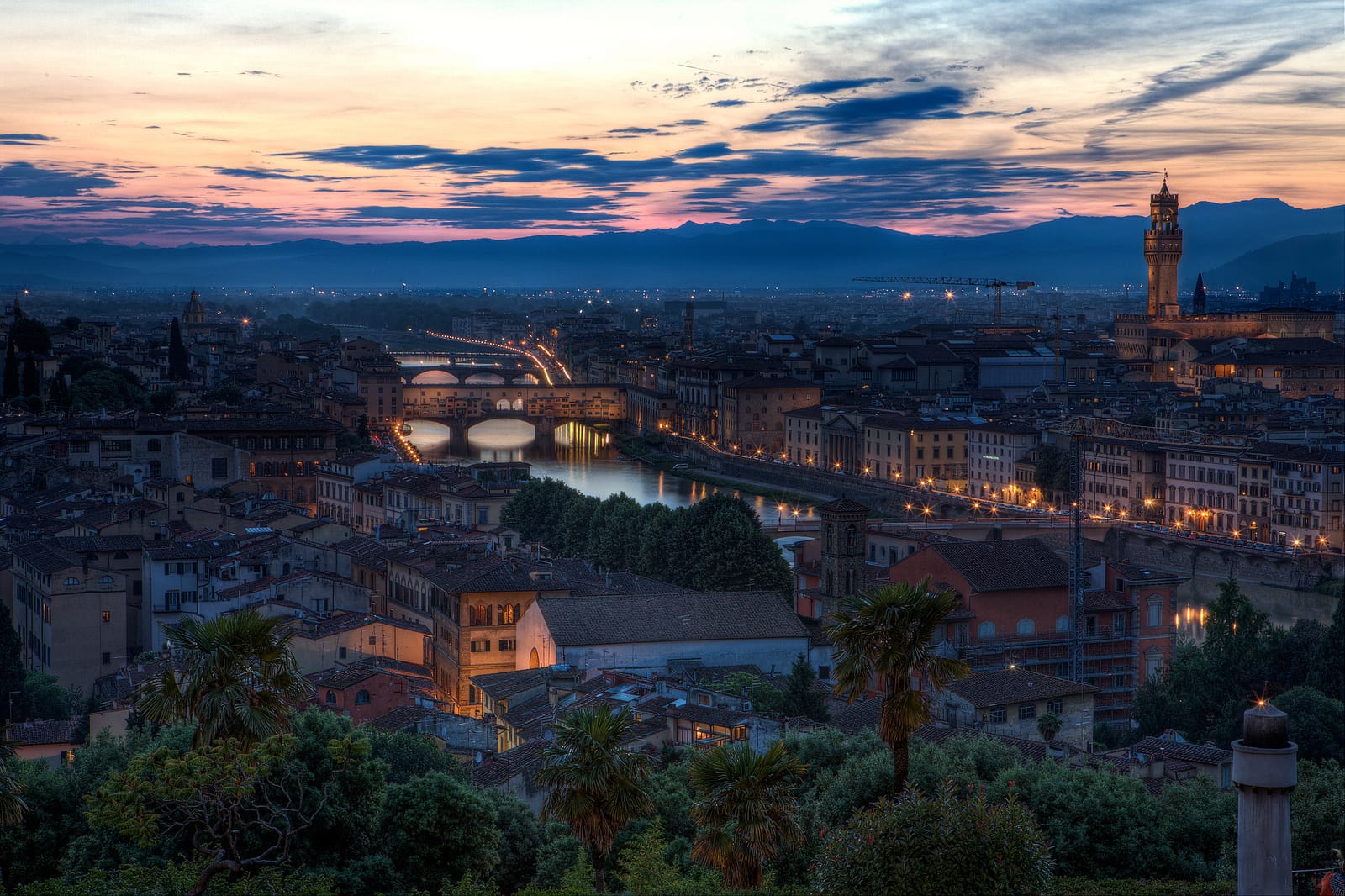 Firenze is in the centre of both Tuscany and Italy and it is one of the most important cities for arts, culture, business and manufacturing.

Due to its position, it is easy to reach and well linked to other important destinations, both by trains and the highway. Among the artistic and religious must see, there are certainly the Cathedral of Santa Maria del Fiore, the Baptistery, the Uffizi Gallery, Bargello and Galleria dell’Accademia. The churches of Santa Maria Novella and Santa Croce are authentic art galleries, as well as the Library Medicea Laurenziana that is the expression of Michelangelo’s genius. You can not miss Palazzo Pitti, the romantic Ponte Vecchio and Boboli Garden.